Bayes’ rule is amazing. Ever since I came across Bayes’ rule in statistics I have been in love with this simple yet elegant formula in statistics which has application in wide area of research such as AI, health care, economics and what else. Although it looks very simple, in many cases it becomes very complicated to compute it in closed form. This complication arises due to the denominator of the formula which is the marginal probability distribution of the observations. This term is sometimes very hard (or virtually impossible) to compute analytically. To bypass this complexity, several approaches has been proposed to approximate the Bayesian posterior such as Variational inference, Markov Chain Monte Carlo (MCMC) etc . In this informal tutorial we are going to see how we can approximate the Bayes rule using MCMC.

Recap with an example

Before diving into the algorithm, just for revision let’s first see the Bayes’ rule with a linear regression example. Let’s say you are given 10 random values of \(x\) and their corresponding values of \(y\) from the quadratic function \(y = 2x^2 - 3x + 1\). Our goal is to guess the coefficients quadratic model \(w_0x^2 + w_1x + w_2\) using the given data (observations). This is an easy problem from machine learning perspective. We can simply do a least square regression with gradient descent to find an estimate of the coefficients \(w_0\), \(w_1\) and \(w_2\). However, this type of regression will give you only an fixed value estimate of these coefficients and thus you will have only a fixed function. Say for example, after the gradient descent we get \(w_0 = 1.87\), \(w_1 = -2.6\) and \(w_2 = 0.89\). Clearly, these values are not same as that of the actual function and these coefficient will not represent the actual function for all the possible values of x that were not in the given data set. The quadratic model with these estimated coefficients will predict \(y\) for any value of \(x\) with absolute certainty and this might not be very good for many practical purposes. Many times it is better to have an estimate of prediction uncertainty and with the prediction.

How to get an estimate of the prediction uncertainty? One way to deal with this is to have a probability distribution over the coefficients (say a multivariate Gaussian distribution with some mean and covariance) instead of fixed values. Then we can sample some set of \((w_0, w_1, w_2)\) from this distribution and then we can compute the \(y\) values using each set of \((w_0, w_1, w_2)\) for any value of \(x\). Thus we can have an estimate of mean and variance of predicted \(y\)s. The variance will correspond to the uncertainty in the prediction.

One way to estimate the probability distribution \(P(w_0, w_1, w_2)\) or simply \(P(W)\) is Bayesian inference i.e using Bayes’ rule. The Bayes’ rule can be written as follows:

where, \(W\) is the vector of coefficients of out quadratic model and \(D\) represents the given data.

\(P(W)\) : This is the prior distribution over \(W\). This is simply a guess (by us) or can be from some prior information about the model/problem.

\(P(D \mid W)\) : This is called likelihood of the given data with some \(W\). This can be calculated form our model i.e the quadratic model. We’ll see it later how to do that.

\(\int {P(D \mid W_i)P(W_i)dW_i}\) : This is called the marginal distribution over the data. i.e the distribution of (x,y) pairs for all the possible values of \(W\) using our quadratic model. And this is the most problematic term in Bayes’ rule. For a complex model (such as neural networks) with continuos \(W\) it is very hard to compute this integral in closed form. And thus in those cases we cannot apply Bayes’s rule as it is and we need to approximate the posterior distribution from whatever portion of the formula is computable. One such approximation method is MCMC.

STEP 1: As in the previous case, we start with a random value of \(W_{start}\). We define a multivariate Normal distribution \(\mathcal{N}\) with mean \(W_{start}\) and a fixed (user defined) co-variance \(\Sigma\) (called Proposal width).

STEP 5 Repeat the process from STEP 1 until convergence.

And this is the end of the main story.

Now if we look back, in the algorithm we have used mainly 2 ‘not so well’ defined terms:

Covariance \(\Sigma\) (Proposal width): This parameter should be tuned in such a way that acceptance rate at any time is approximately 50%. i.e 50% of the \(W_{next}\) should be accepted by the algorithm. This is important because if you use a very larger covariance (proposal width), then chance of accepting a jump wll be very small and the algorithm will be inefficient. On the other if proposal width is very small then it will take more time to converge.

Convergence: There is no perfect way to guess this. One simplest way is to observe the steadiness of the statistics of the drawn samples (e.g Converging mean/variance statistics to a value). A better way is to see the process graphically with trace (simply plotting the value over time) and density (smoothed histogram) plots for each variable (i.e dimensions of W). At convergence these plots should be approximately stable. Further readings here

Let’s run our example in Python

I have written a small and very straight forward code to find the values of \(W_0\), \(W_1\) and \(W_2\) for our linear (actually quadratic) regression example using Bayesian approach with approximation of the posterior using MCMC. After running this we should get \((W_0, W_1, W_2)\) very close to our actual coefficients (2, -3, 1). The code and the plot is shown below: 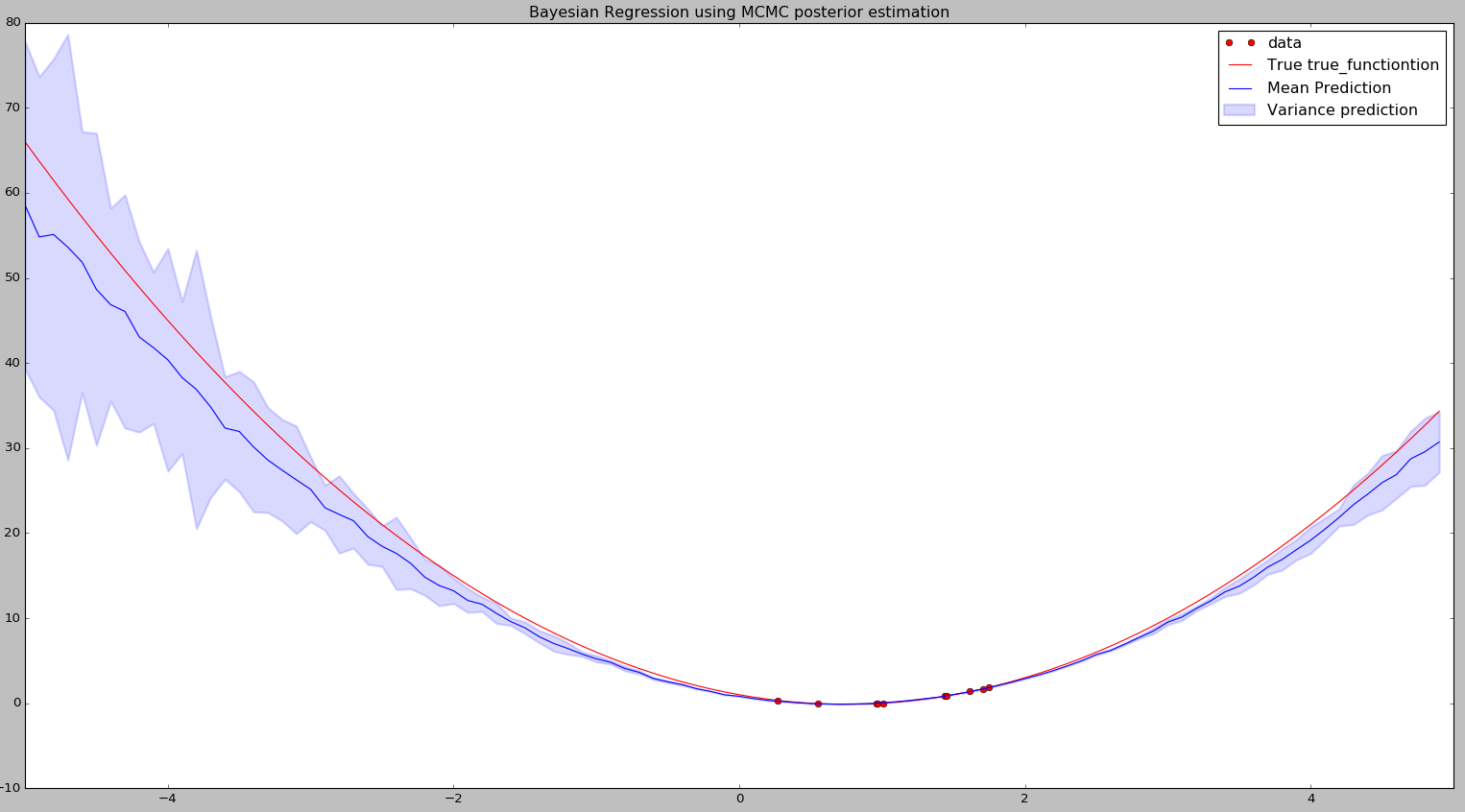 Yay! Our paper got accepted in CoRL 2018

Sleep sort - an out of the box sorting algorithm